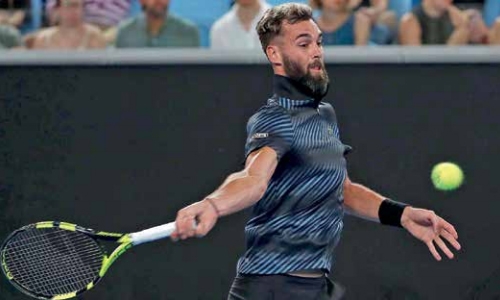 Top seeded Frenchman Benoit Paire saved a match point and then fought back to beat compatriot Ugo Humbert 3-6 7-6(2) 6-3 to move into the quarter-finals of the Winston-Salem Open in North Carolina on Wednesday. Paire, 30, took two hours and 27 minutes to beat the 21-yearold Humbert, who was the youngest player left in the men’s draw at Wimbledon last month prior to his last-16 exit at the hands of eventual champion Novak Djokovic.

“I’m really happy to win against him,” Paire said. “When you play against a young player from your country, you want to win. It’s good for the confidence.” Humbert nearly claimed victory in the second set when he served for the match at 6-5 but Paire managed to break the youngster to take the set to a tiebreak. Paire will face Spanish 11th seed Pablo Carreno Busta who beat Italy’s Lorenzo Sonego 7-6(7) 6-0.

On the other side of the draw, Canadian second seed Denis Shapovalov fired eight aces and converted five break points to beat Serbia’s Miomir Kecmanovic 6-2 6-3. Shapovalov will face Russia’s Andrey Rublev who knocked out American sixth seed Sam Querrey in straight sets, avenging his second round loss to the American at Wimbledon. With the players breaking each other twice in the match, Rublev triumphed after both sets went into a tiebreak to win 7-6(4) 7-6(10).

“It’s a special win for me. He just destroyed me, and now we had a great fight, and we were both so close and I was a little bit more lucky,” Rublev said. American Frances Tiafoe and Poland’s Hubert Hurkacz advanced as Serbia’s Filip Krajinovic retired due to an illness while Spaniard Feliciano Lopez was too fatigued to continue.

Trump takes aim at automakers that ignored his emissions proposal