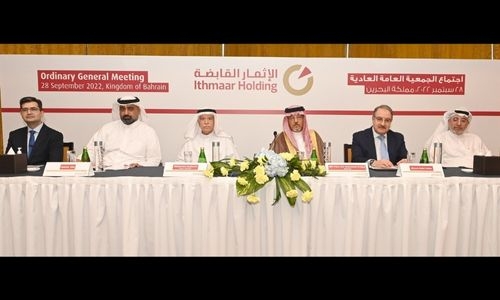 Shareholders of Ithmaar Holding, a Bahrain-based holding company, yesterday reconstituted the company’s Board of Directors, electing four and appointing two new members to the Board. The new Board was decided during an Ordinary General Meeting (OGM) chaired by Ithmaar Holding Chairman, Prince Amr Al Faisal, at the Ritz-Carlton Hotel in Bahrain. Representatives from the Central Bank of Bahrain, the Ministry of Industry and Commerce), the Bahrain Bourse, and the Company’s statutory auditors, PricewaterhouseCoopers were present.

The new Board will serve a three-year term, from 2022 to 2025, and consists of four elected members, being HRH Prince Amr Mohammed Al Faisal; Tunku Yaacob Khyra; Dr Amani Khaled Bouresli; and Elham Ebrahim Hasan, as well as two members appointed by the major shareholders, being Mohammed A .