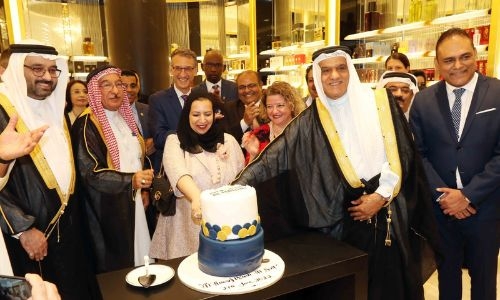 The ceremony began with a welcoming speech by Amal Mansoor, followed by Abdul Wahab Al Hawaj. Members of the Business Women Association, journalists, wives of ambassadors and diplomats were present. Her Highness expressed her admiration for the range of international brands available and praised Al Hawaj group for excelling in the brand quality on display. Al Hawaj presented Her Highness Shaikha Thajba with a souvenir.

Under the patronage of Industry minister

The evening ceremony began with a speech by Jawad Al Hawaj, followed by that of Abdul Wahab Al Hawaj. He emphasized the importance of strategic branch location and availability of Al Hawaj Group towards their clients. Al Hawaj Group presented a souvenir gift to the Minister, which was received on his behalf by Eman Al Doseri, Undersecretary of the Ministry.