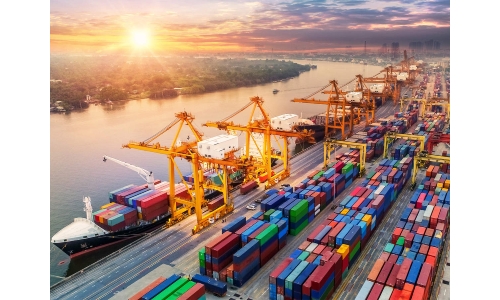 Bahrain’s trade deficit has shrunk to BD1 million during May 2022, a 99% improvement compared to BD64 m in the same month a year, according to the foreign trade report for May 2022.

Value of imports rose by 29% in May, while export of national origin products increased by 62%, says the report by the Information and e-Government Authority on the balance of trade, imports, exports (national origin), and re-exports.

Australia ranked first when it comes to imports to Bahrain, with a total of BD71 m, China was second with BD69 m, and Brazil was third with BD63 m.

Aluminium oxide was the top product imported into Bahrain with a total value of BD70 m, while non-agglomerated iron ores and concentrates were second with BD54 m, and petroleum coke not calcined was third with BD18 m.

The value of exports of national origin increased by 62% to BD460 m from BD283 m for the same month of the previous year.

The top 10 countries purchasing from Bahrain accounted for 75% of the total value, with the remaining countries accounting for 25%.

Saudi Arabia ranked first among countries receiving Bahraini exports of national origin, importing BD90 m from Bahrain. The US was second with BD64 m and Italy third with BD 42 m.

Unwrought aluminium alloys ranked as the top products exported during May 2022 with BD189 m, Agglomerated iron ores and concentrates were second with a value of BD73 m and the third was aluminium wires with BD18 m.

The total value of re-exports increased by 5% reaching BD57 m during May 2022, compared to BD55 m for the same month of the previous year.

The top 10 countries accounted for 86% of the re-exported value, while the remaining countries accounted for 14%. Singapore ranked first with BD15 m, The United Arab Emirates second with BD9.5 m, and the Kingdom of Saudi Arabia third with BD8.6 m. Parts of aircraft engines the top product re-exported from Bahrain with BD18 m, came in second place for four-wheel drive cars with BD2.9 m, and gold ingots came third with BD2.3 m