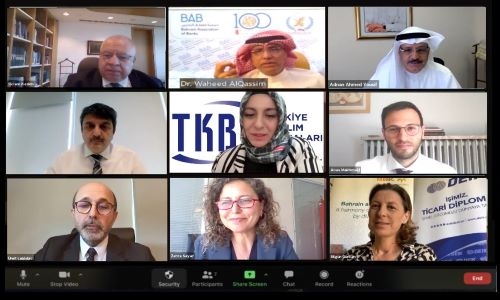 Top Bahraini and Turkish banking officials came together for a webinar by the Bahrain Association of Banks to discuss the possibilities of promoting investments in the banking and finance sectors, emerging economic opportunities and ways to provide sustainable financing.

There are currently five major Turkish manufacturing companies operating in Bahrain, and the trade turnover reached USD 500 million in 2019.

Umit Leblebici, a member of the Turkish Council of Foreign Economic Relations, expressed their keenness to encourage mutual investments.

“The Council of Foreign Economic Relations, which has 146 major business institutions and more than 2,000 Turkish entrepreneurs as members, recently established a banking and financial working group to assist the Turkish private sector in obtaining financing through local, regional and international banks. The Council is keen to discuss the cooperation and common opportunities with Bahraini Banks through BAB,” Leblebici said.

Hakki Karatas, the Chief Economist of the Turkish Council of Foreign Economic Relations, said the economic and financial ties would benefit both countries.

Turkey, he said, is the fifth-largest economy in Europe.

The Turkish economy, he said, just like most others, had also suffered a decline due to the COVID-19 pandemic.

The Secretary-General of the Turkish Banks Association, Ekrem Keskin, indicated that the financial markets in Turkey started to recover from the effects of the pandemic, pointing out that this represents an opportunity for closer cooperation.

“The two sectors are similar in many respects, including the freedom to conduct business, corporate ownership and the movement of funds to and from the state, besides no fees are on capital flows for local or international investors,” Keskin added.

Zehra Sayar, Head of International Loans at the Türk Eximbank, discussed the cooperation in “Export Credit”, noting that Eximbank, established in 1987, is the official provider of export credits in Turkey and operates through 22 branch and ten liaison offices across the country, and subject to the Banking Law. This webinar comes in light of the efforts of the Bahrain Association of Banks and the Banks Association of Turkey to activate the MOU signed between them in 2017.