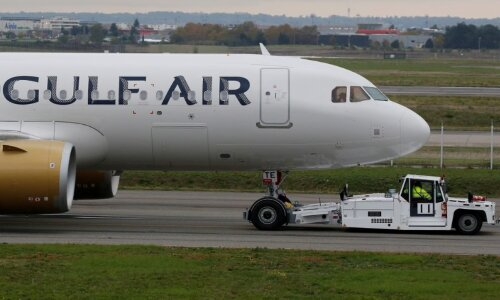 Gulf Air’s chairman yesterday said that market conditions remain difficult and that the Bahrain state carrier had reached a deal with Airbus and Boeing to delay deliveries of some new aircraft.

Flying remains at very low levels around the world as airlines struggle to rebound from the COVID-19 pandemic that has left many planes grounded or flying near-empty.

“It is very difficult because you are bound by your destinations. We have the fleet.

We have the crew. We would like to fly to as many places as we can, but we have to factor in demand,” Zayed bin Rashid al-Zayani told reporters at the Arabian Travel Market exhibition in Dubai.

The Bahraini airline has reached an agreement with Airbus and Boeing to delay aircraft that were scheduled for delivery in 2020 and 2021 by about six to nine months, he said.

Zayani, also a Bahraini government minister, did not disclose which aircraft had been delayed, but he said the airline would receive six new jets this year, twice as many as it did in 2020.

Gulf Air has previously said it was looking to delay deliveries of Airbus A320neo jets and Boeing 787-9 Dreamliners. The airline is not cancelling aircraft orders, Zayani said.

Asked if Gulf Air was receiving “government support”, he replied: “who isn’t?”

The airline received 36 million dinars ($95.6 million) from the Bahrain government last year, according to a government bond prospectus seen by Reuters.