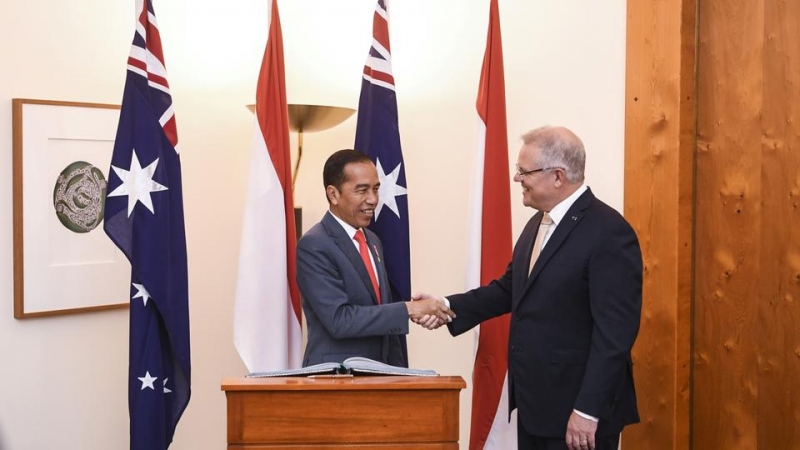 Australia and Indonesia announced a 100-day plan yesterday to implement a long-awaited trade deal, as the two countries hailed a “new beginning” for their sometimes troubled relationship.

The two G20 economies hope to deepen trade currently worth a modest US$12 billion a year, in a region increasingly dominated by China’s economic and military might. Addressing Australia’s parliament on a landmark state visit, President Joko Widodo cast the two nations as would-be “Avengers” -- “forces of good” uniting to defeat a “common enemy” and shared challenges like protectionism, intolerance and climate change.

Widodo said his visit to Australia marked “a new beginning of a new relationship” between the two nations. The 58-year-old former furniture manufacturer was sworn in for a second term late last year, promising to reduce widespread poverty as Indonesia becomes one of the world’s largest economies. Negotiations over the Australia-Indonesia trade deal began in 2010 and it was ratified by Indonesia’s parliament last week, ahead of Widodo’s visit.

The agreement will eventually see the elimination of all Australian trade tariffs, while 94 per cent of Indonesian duties will be gradually eliminated. Greater access to the Australian market is expected to spur Indonesia’s automotive and textile industries, and boost exports of timber, electronics and medicinal goods. The pact also includes improved access for Australia’s agriculture industry to Indonesia’s vast market of 260 million people. Australian universities, health providers and miners will also benefit from easier entry to Southeast Asia’s biggest economy.

In a joint public appearance with Widodo in Canberra, Australian Prime Minister Scott Morrison outlined a 100-day “action plan” for implementation. He called the long-delayed deal a “mutually beneficial arrangement, one that sees the cooperation of our economies for the strong growth that we will see over the next decade and beyond”. The leaders also eyed talks aimed at making it easier for Indonesians to enter Australia and a review of Australian travel advice for tourist destinations in Indonesia, Morrison said.

Ties between Canberra and Jakarta have often been strained, including over Australia’s hardline approach to asylum seekers. The trade deal was meant to be signed in 2018, but stalled when Morrison proposed the relocation of Australia’s embassy in Israel to Jerusalem -- a move that angered Indonesia, the world’s most populous Muslim country.

Both countries have also struggled to manage their relationship with a more assertive Beijing. Last month, Indonesia sent jets and warships to patrol islands near the disputed South China Sea, accusing Chinese vessels of “trespassing”.