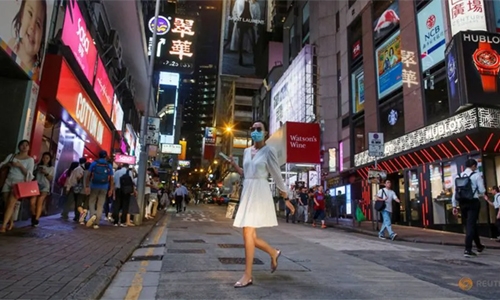 Hong Kong sank into recession for the first time in a decade in the third quarter, government data confirmed on Friday, weighed down by increasingly violent anti-government protests and the escalating US-China trade war. The economy shrank by 3.2 per cent in July-September from the previous quarter on a seasonally adjusted basis, revised government data showed, in line with a preliminary reading. Gross domestic product (GDP) contracted for the second consecutive quarter, meeting the technical definition of a recession.

With no end to the protests in sight, analysts warn the financial and trading center potentially faces a longer and deeper slump than during the global financial crisis in 2008/2009 and the SARS epidemic in 2003. From a year earlier, the economy contracted 2.9pc, also in line with the preliminary reading. The readings were the weakest since the global crisis.

“Domestic demand worsened significantly in the third quarter, as the local social incidents took a heavy toll on consumption-related activities and subdued economic prospects weighed on consumption and investment sentiment,” the government said in a statement. It revised down its forecast for full-year growth to a contraction of 1.3pc versus an earlier estimate of 0-1pc growth. That would mark the first annual decline since 2009.

“Ending violence and restoring calm are pivotal to the recovery of the economy. The government will continue to closely monitor the situation and introduce measures as necessary to support enterprises and safeguard,” the government said. Hong Kong is one of the world’s most important financial hubs with total banking, fund and wealth management assets worth more than $6 trillion.

Many businesses with ambitions to expand in China still consider it as a gateway into the mainland, while Chinese firms use it to access international capital, as well as a testing ground and springboard for their global ambitions. Business activity in the private sector fell to its weakest in 21 years in October, according to IHS Markit, while demand from mainland China declined at the sharpest pace in the survey’s history - which started in July 1998.