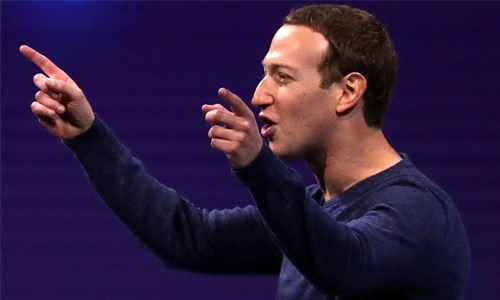 Facebook’s planned virtual unit Libra, already under heavy attack from US President Donald Trump and global regulators, faces scepticism among the wider cryptocurrency community as well. One theme -- besides Brexit -- dominated discussion among the movers and shakers from London’s financial technology or FinTech industry as gathered for their annual get-together: the future of virtual currencies.

“Can I just ask you to raise your hand if you would not be willing to use Libra?” asked the moderator at an event at London’s recent ‘FinTech Week’. In the room, filled with about 100 experts and media who closely track the sector, about two-thirds of participants raised their hand to express distrust at the upstart currency.

Helen Disney, founder and boss of Unblocked Events, which promotes the blockchain technology that powers many cryptocurrencies, acknowledged growing doubts over who exactly would oversee and regulate Libra’s operation.

Power to the people

People are “concerned about how the governance... would work”, Disney said. “The cryptocurrency community is very libertarian in thinking,” its “about giving power to the people, democratisation of finance, keeping away from big banks and companies who control (the) economy,” she said Last week’s gathering came one month after Facebook announced to the world its plans for the virtual currency.

Libra, which is widely regarded as a challenger to dominant global player Bitcoin, is expected to launch in the first half of 2020. Whereas Bitcoin is decentralised, Libra will be co-managed by 100 partner firms, including Facebook’s newly-minted financial services division Calibra. The companies behind Libra -- which will be backed with a basket of real-world currencies -- include payment giants Visa, MasterCard and PayPal, as well as taxi-hailing services Lyft and Uber. To access Libra on smartphones, users will go through a virtual wallet that will also be named Calibra.

While Facebook boasts an enormous customer base dotted across the globe that should facilitate Libra’s uptake, it firm also been plagued by privacy concerns that could make users hesitate. “Can’t wait for a cryptocurrency with the ethics of Uber, the censorship resistance of Paypal, and the centralisation of Visa, all tied together under the proven privacy of Facebook,” said Sarah Jamie Lewis, head of non-profit research organisation Open Privacy.

Libra has meanwhile raised eyebrows among the world’s financial regulators, including the Bank of England, the European Central Bank and the US Federal Reserve. But Disney believes that Libra will finally force regulators to present clear regulation guidelines, as demanded by the cryptocurrency community itself. “We have been waiting for a long time for a clearer signal (regarding) the regulation of cryptocurrencies and digital assets,” she said.

But James Bennett, head of cryptocurrency research firm Bitassist, argues that Libra should not be seen in the same light as Bitcoin. “In the long run, people may realise that Libra is not a cryptocurrency,” Bennett said at the FinTech Week event. “A true cryptocurrency should be resistant to attacks by all parties, from sovereign states to global corporations,” he said, adding that “cryptocurrency is a type of money used to transfer value over the internet that cannot be stopped, confiscated or destroyed by any single entity”.

‘Based on thin air’

Trump has meanwhile unleashed a vicious attack on virtual currencies, slamming them for their alleged shadowy nature and arguing that Libra had no standing nor dependability -- unlike the dollar. “I am not a fan of Bitcoin and other cryptocurrencies, which are not money, and whose value is highly volatile and based on thin air,” Trump tweeted Thursday

Pakistan to pay foreign firm $6 billion over mine closure