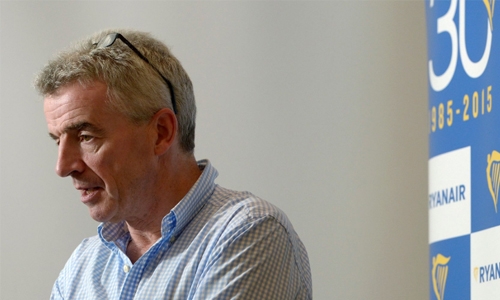 Ryanair’s annual net profit slumped by almost one third as overcapacity in the European short-haul sector caused it to cut ticket prices, the Irish no-frills airline said Monday. Profit after tax dropped 29 percent to 1.02 billion euros ($1.14 billion) in the year ending March 31 compared with a year earlier, the Dublin-based carrier said in an earnings statement. Ryanair said profits could decline further in 2019/20, to between 750 million and 950 million euros.

“Short-haul capacity growth and the absence of Easter in the fourth quarter led to a six percent fare decline,” chief executive Michael O’Leary said in the statement. However, the drop in fares attracted more passengers, the number of which rose by nine percent to 142 million for the year. Europe’s short-haul sector is being weighed down by fierce competition despite some consolidation, including Ryanair’s recent purchase of Austrian carrier Lauda.

“We expect further consolidation and airline failures in winter 2019 and again into 2020 due to over-capacity, weaker fares, and higher oil prices,” Ryanair said Monday. The slide in annual profits comes as the airline undergoes major restructuring. Mirroring a set-up by British Airways and Iberia owner IAG, Ryanair aims to have four distinct operations, each with its own chief executive.

Under overall boss O’Leary, will be Ryanair DAC overseeing the Irish operations, Ryanair UK, Lauda for its Austrian business and Ryanair Sun, or Polish unit, according to an announcement earlier this year. Ryanair’s recent performance has been hit also by pan-European strikes last year that forced it to cancel flights, affecting thousands of passengers, and offer improved pay deals to staff via landmark deals with unions. Ryanair is also exposed to any Brexit fallout, with Britain accounting for about one-quarter of its revenues.