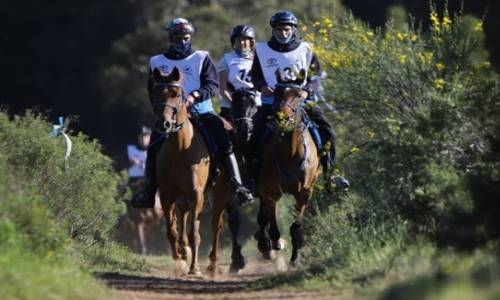 HM the King’s Representative for Humanitarian Work and Youth Affairs, HH Shaikh Nasser bin Hamad Al Khalifa, has stressed the major role played by sports in promoting the kingdom at various international sporting events, in line with the vision of His Majesty King Hamad bin Isa Al Khalifa, and the aspiration of His Royal Highness Prince Salman bin Hamad Al Khalifa, the Crown Prince and Prime Minister, for achieving the Economic Vision for Bahrain 2030.

In this regard, HH Shaikh Nasser indicated that holding the Bahrain Victorious Endurance Cup in Uruguay contributes to enhancing the kingdom’s prestigious sports status at the international level, noting that the event embodies HM the King’s great support for using sports to promote the kingdom.

HH Shaikh Nasser affirmed that the event has many benefits, underlining his constant support for races that contribute to promoting the kingdom and consolidating its status in the sports field.

HH Shaikh Nasser commended the tremendous efforts exerted by the Audee Uruguay Endurance to ensure the success of the event, extending congratulations to all the winners.

The Bahrain Victorious Endurance Cup in Uruguay featured 160-km and 120-km races, in addition to a 100-km which will be held later.