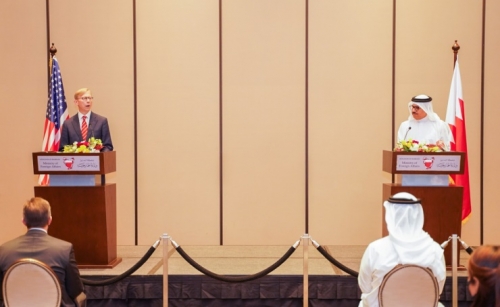 ‘Arms embargo on Iran a must for stability and peace’

An urgent call has gone out for the United Nations to extend an expiring weapons embargo on Iran to maintain peace and stability in the region. This appeal was made by U.S. Special Representative for Iran and Senior Policy Advisor to the Secretary of State, Brian Hook, who spoke at a Press conference last night alongside Foreign Affairs Minister Dr. Abdullatif bin Rashid Al Zayani.

“I stand here today, shoulder to shoulder with Bahrain, to call on the UN Security Council to extend the UN embargo on Iran,” said Hook. The U.S. Special Representative highlighted U.S. efforts in working with regional governments to maintain security and stability in the Middle East, while warning of drastic consequences with a failure to extend the arms embargo, which expires in October.

“From maritime security to economic prosperity to religious freedom, we will continue to work together; but if our restrictions on Iran are permitted to expire, this work will become much harder,” he said. “The world cannot allow this to happen.” Hook stressed that the U.S. partnership with Bahrain is strong, and that it is based on trust and will continue to grow.

“We remain committed to Bahrain’s security and to our deep and effective partnerships to counter Iran-backed terror,” he said. He blamed Iran on spending major revenues for funding terrorism, and noted that the country is in big financial trouble while not being bothered to spend on its citizens’ welfare Hook called on the brotherly countries in the region to support extending the arms embargo.

“They are unanimous in their view that the last thing this region needs is more Irani weapons,” he said. “They must extend the embargo and give stability in the region a chance so that future generations can flourish.” Hook intends to visit countries who believe that the embargo is a must to maintain peace and stability.

He has already been to the UAE and Saudi Arabia, and is planning to visit three more nations. Meanwhile, the Foreign Minister mentioned that Hook held a meeting with His Royal Highness Prince Salman bin Hamad Al Khalifa, Crown Prince, Deputy Supreme Commander and First Deputy Prime Minister.

He thanked the U.S. and Fifth Fleet for their continuous support to Bahrain. The Foreign Minister accused Iran for funding nearly 29,000 attacks, which has disrupted civilian life in Bahrain, and also blamed Iran for being behind the Saudi Aramco attack. On these circumstances, he demanded that the UN continue its arms embargo on Iran for peace and stability in this region.