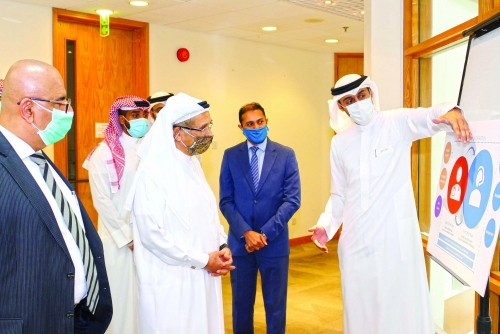 The number of employees working in shifts at the Coronavirus Unified Call Centre (444) is set to be doubled in the upcoming days, it was revealed yesterday. One shift is currently covered by 50 employees, but due to the high number of calls received daily, the number will be increased, according to officials.

Officials updated him on the centre’s general readiness and the services provided, in accordance with the highest standards in this respect. They revealed that the centre responds to people’s queries through a team of 180 employees and volunteer doctors, who have been trained to deal with various cases.

The number of calls received each day exceeds 10,000, with more than 120 calls at the same time at peak time. The centre works around the clock throughout the week and one call can last four-and-a-half minutes and may extend up to 20 minutes to guarantee that the case of the caller is understood thoroughly.

Officials added that the stae-ofthe-art centre operates according to the highest data security standards to ensure the secrecy of calls. It provides support in Arabic, English and Urdu to facilitate communication with both local and expatriate communities.

The SCH President affirmed during his visit to the centre that the Kingdom of Bahrain, thanks to the leadership of HM the King, the directives of HRH the Premier, the relentless efforts of HRH the Crown Prince and cooperation of all, is capable of overcoming all challenges.

The SCH president lauded the dedicated national efforts of health professionals in the Kingdom and the support given to ensure success of the centre’s work, backing the national efforts to curb the COVID-19 outbreak. He stressed the need for all to adhere to the guidelines and regulations put in place by the authorities, describing them as the right way to surmount the current phase.

The SCH president said that the call center is considered the first gateway to dealing with COVID-19 cases. He noted that it plays a key role in the success of the national efforts to address the pandemic.

The center provides support for all cases, including existing patients, people who have come into contact with those infected, and those in precautionary health quarantine. It also responds to people’s queries about COVID-19.