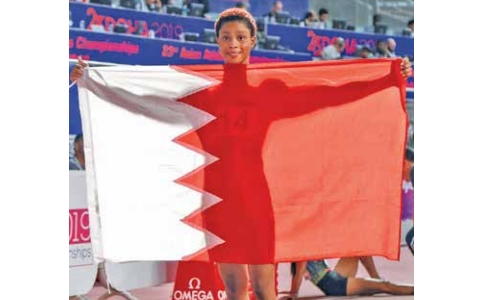 Bahraini athletes won 22 medals, including 11 gold, seven silver and four bronze medals at the 23rd Asian Athletics Championship that was recently concluded in Doha, Qatar. Bahrain’s Salwa Naser increased her gold medal total to four on the final day of the event. Naser, the 2017 world 400m silver medallist, ran a spectacular anchor leg in the 4x400m relay, the penultimate event of the Championships in Khalifa Stadium which in five months’ time will host the International Association of Athletics Federations’ World Championships.

A distant fourth when she took the baton, Naser faced a deficit of some 20 metres as she went into the first bend, the IAAF reported. But she moved gradually into contention before taking the lead in the home straight in passing India’s Vismaya Velluva Koroth in a superb split time of 49.70sec. That performance came two hours after she had earned gold in the women’s 200m to go with the ones she had earned on previous days in the 400m and 4x400m mixed relay, along with her bronze from the 4x100m. Naser had won her 200m final in 22.74sec after overhauling 100m winner Olga Safronova in the middle of the final straight. Her time improved by 0.10 the Championship record of 22.84 she had equalled the day before. To widespread media disappointment, Naser rushed through the mixed zone without stopping to speak.

His Highness expressed pride in the national team’s victory, surpassing strong competitors, such as China and India, and proving the Kingdom of Bahrain’s competency of taking leading positions in sports and other fields.

Bahrain U19 cricket team prepares for ACC tournament in UAE