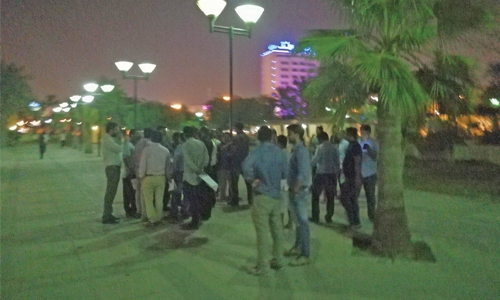 Manama : Over 50 employees of a construction company staged a protest at Andalus Garden yesterday demanding the release of pending  salaries.

The agitating workers claimed that about 200 employees working in the company were not paid since November last year.

Jagan, a protesting employee told DT News that the company has also falsely informed the ministry that “the dues were cleared” which is not right.

“They have paid a few of the employees,” he said adding: “Thirty Bahraini employees were paid but all of us who are expatriates weren’t paid.”

“They have lied to the ministry and the public and this has made us even more anxious,” he said. “We are struggling everyday financially.”

“They have ruined our careers and even our visas are expired now,” he said.

According to Jagan, most of them were recruited in 2016 when the company bagged some major contracts.

The company, he claimed, however, “failed to make payment to the suppliers” resulting in the projects getting delayed.

This also resulted in the company getting “fired by the clients,” said Jagan.

The employees, however, “continued to work until April,” Jagan claimed adding: “Even though we weren’t paid since November.”

“A total of five months’ salaries from December to April are pending now,” he said

He also alleged that the company is now refusing to communicate with them.

“We are totally in the dark,” he said. “We weren’t even fired by the company.”

“When we call them, they don’t answer,” he said.

Bahrain MP says Quran reciting should be on the curriculum