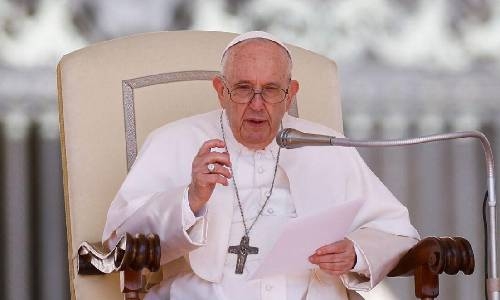 Pope Francis on Wednesday appealed for calm in Sri Lanka and for authorities to “listen to the aspirations of the people” as the island reels from deadly violence and rioting.

“I offer a special thought to the people of Sri Lanka, in particular to the young, who in recent times have made their cry heard in the face of the country’s social and economic challenges and problems,” he said at the end of his weekly audience.

“I join religious authorities in urging all sides to maintain a peaceful attitude, without giving in to violence.

“I appeal to all those who have responsibilities to listen to the aspirations of the people, guaranteeing full respect for human rights and civil liberties.”

Sri Lankan police have been ordered to go on the offensive and use live ammunition to stop rioting, a top official told AFP Wednesday, after another night of sporadic arson attacks.

Police say eight people have died since Monday, when frustration at the island’s dire economic crisis erupted into violence between supporters and opponents of President Gotabaya Rajapaksa.