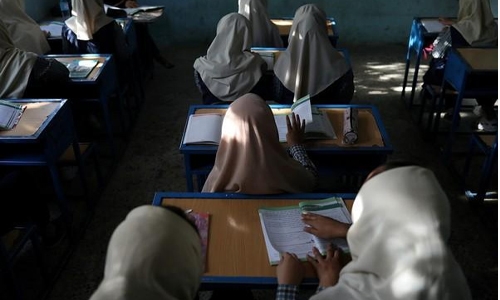 Female teachers are uncertain about their future in Afghanistan after the Ministry of Education issued a notice calling on male students and male teachers from grades seven to 12 to return to school.

This came into effect on Saturday, Ariana News reported.

The notice did not mention female students and teachers, nor did it give any indication of what would happen in future to the hundreds of thousands of girls in secondary school.

Many female teachers have said that they are the only breadwinners in their families.

Ariana News quoting Khatara, a Grade 12 Pashto subject teacher at the Bibi Sara Khairkhana school in Kabul, said that the Kabul Education Department had asked her not to return to school until further notice and that the education process for girls in Grades 7 and above had stopped.

Khatara, who is her family’s only breadwinner, has been a teacher at the school for 15 years. However, she is now struggling financially and has called on education ministry officials to allow female teachers to return to work

“If an educated woman is not represented in the society like a woman doctor, then who would treat women? If this issue is not addressed, there will be an education crisis in the country,” said Khatara.

Her family members are worried about what their future will entail if the family’s only breadwinner loses her job.

“We call on the Islamic Emirate to allow women to continue their work. Many women are their family’s only breadwinners,” said Basharatullah, Khatara’s brother.

Meanwhile, the United Nations Children’s Fund on Saturday welcomed the move to reopen secondary schools in Afghanistan but stressed that girls must not be left out.

“We are deeply worried, however, that many girls may not be allowed back at this time,” said UNICEF Executive Director Henrietta Fore in a statement.

According to UNESCO, Afghanistan has made important gains in the education sector in the past two decades. Since 2001, the female literacy rate has almost doubled from 17 per cent to 30 per cent, and the number of girls in primary school has increased from almost zero in 2001 to 2.5 million in 2018.