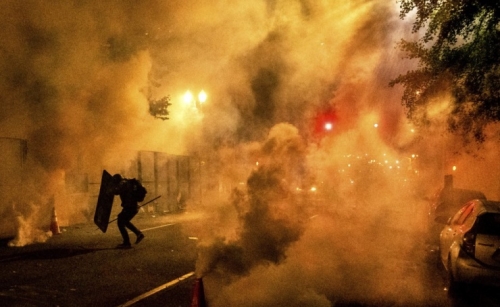 A persistent crowd of protesters remained outside the federal courthouse in Portland, Oregon, into the early hours of Saturday as fireworks were shot at the building and plumes of tear gas, dispensed by U.S. agents, lingered above.

Thousands of people gathered in Portland streets hours after a U.S. judge denied Oregon’s request to restrict federal agents’ actions when they arrest people during protests that have roiled the city and pitted local officials against the Trump administration.

By 8 p.m. a few hundred people, most wearing masks and many donning helmets, had already gathered near a fountain, one spot where groups meet before marching to the Hatfield Federal Courthouse and the federal agents there. They chanted and clapped along to the sound of thunderous drums, pausing to listen to speakers, The Associated Press reported

Five lands in the dock for photographing and circulating death