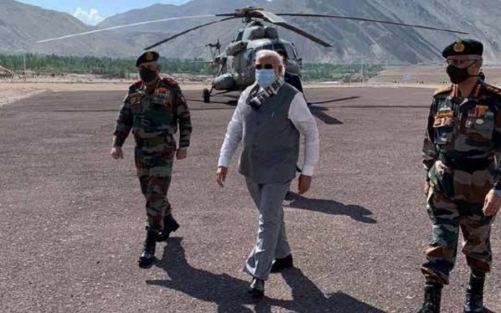 Prime Minister Narendra Modi flew yesterday into the northern border region where Indian and Chinese troops are locked in a standoff, and said the military stood ready to defend his country. His comments prompted Beijing to call for restraint at the tense border area in the northern Himalayan region of Ladakh.

Modi, making his first trip to the Ladakh region since the Indian army lost 20 soldiers in a clash with Chinese soldiers last month, said his country’s commitment to peace should not be seen as a sign of weakness. “Today India is becoming stronger, be it in naval might, air power, space power and the strength of our army.

Modernization of weapons and upgradation of infrastructure has enhanced our defence capabilities multifold,” he said in a speech to soldiers near Leh, the regional capital. India says Chinese troops have intruded across the Line of Actual Control, or the ceasefire line separating the two armies in the high altitude Ladakh region, and the clash on June 15 occurred because Chinese troops sought to erect defences on India’s side of the de facto border.

China says the whole of the Galwan valley where the clash occurred is its territory and that it was frontline Indian troops that had breached the border, which is not demarcated. China’s foreign ministry said yesterday the two countries were holding talks to reduce tensions.

Spokesman Zhao Lijian, responding to a question about Modi’s visit to the border region, said both sides were in communications through diplomatic and military channels to ease the situation. “In these circumstances, neither side should take actions that might complicate the border situation,” he said at a daily news briefing in Beijing.

Modi referred to expansionism in his speech to soldiers, saying it caused problems. “(The) Prime Minister said that the time for expansionism is over. This is the era of development,” the Indian government quoted Modi as saying, in a press release. “He recalled that it is this mindset of expansionism that did great harm.”