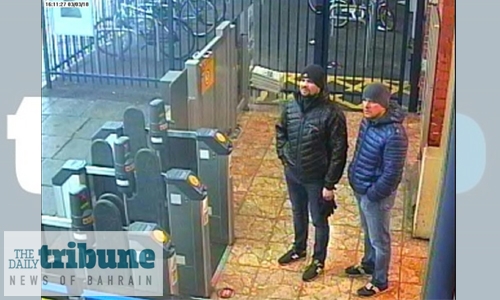 Downing Street said Johnson told the Kremlin chief on the sidelines of a summit on the Libya crisis in Berlin that ties between Moscow and London would not return to normal until Russia ended its “destabilising” activities. Johnson “was clear there had been no change in the UK’s position on Salisbury, which was a reckless use of chemical weapons and a brazen attempt to murder innocent people on UK soil,” Downing Street said in a statement.

“He said that such an attack must not be repeated,” Johnson’s office said. Russia has repeatedly rejected accusations that officers from its GRU military intelligence agency used a powerful nerve agent to poison Skripal in retribution for his work with British and other Western spy services.

Skripal and his daughter both spent days in a coma but survived and have since gone into hiding. The incident further undermined London’s already difficult relations with Moscow. Downing Street said Johnson had told Putin “they both had a responsibility to address issues of international security including Libya, Syria, Iraq and Iran”.

But the British leader also made clear that this dialogue did not mean London’s relations with the Kremlin were back on track. “The prime minister said there will be no normalisation of our bilateral relationship until Russia ends the destabilising activity that threatens the UK and our allies and undermines the safety of our citizens and our collective security,” his office said.

London and Washington identify the GRU as Russia’s main security threat to Western interests abroad. Both also accuse the agency of attempting to hack the world’s chemical weapons watchdog in The Hague in 2018 in order to spy on its investigation into the use of nerve agents in Syria.

British officials have identified the two Russians suspected of delivering the nerve agent to Salisbury as GRU agents Alexander Mishkin and Anatoly Chepiga. Both men entered Britain using false passports and were captured on CCTV footage walking around the southern English town shortly before Skripal and his daughter Yulia were found slumped on a park bench.

Mishkin and Chepiga later told Russian television that they were tourists who went to Salsbury to look at the local cathedral. The open-source investigations website Bellingcat argued last June that a GRU officer coordinated the attack from a London hideout using his phone and a few messaging apps.