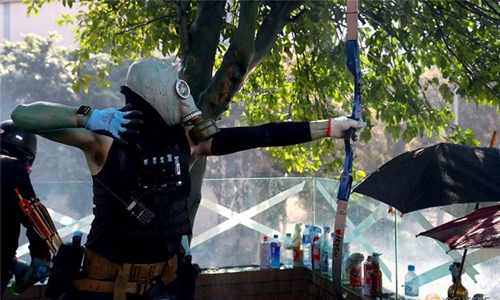 A police officer was struck in the leg by an arrow shot by a Hong Kong activist yesterday, the city’s force said, as fierce clashes raged at a university which has become a fulcrum of pro-democracy protests. Images showed the arrow embedded in the calf of the police officer, who was working with the force’s media liasion team at the Hong Kong Polytechnic University (PolyU), the scene of fierce clashes. A statement said he was taken to hospital in “a conscious state”.

Police deployed water cannon and tear gas against protesters occupying the campus in the Hung Hom area of Kowloon, now a key battleground as the demonstrators fight to keep a stranglehold on the Cross-Harbour Tunnel nearby, blocked since Tuesday. Activists have vowed to “squeeze the economy” as the increasingly divided city reels from one of the worst weeks of violence in the months-long crisis.

Protests have swept the global financial hub since June as many in the city of 7.5 million people have vented fury at eroding freedoms under Chinese rule. A marked change in tactics last week to a “Blossom Everywhere” campaign of blockades and vandalism stretched the police force, shut down large chunks of Hong Kong’s train network and forced schools and shopping malls to close. Students and protesters occupied several major universities around the city -- the first time a movement characterised by its fluidity and unpredictability has coagulated in fixed locations.

A poster circulating on social media called for the “dawn action” to continue on Monday. “Get up early, directly target the regime, squeeze the economy to increase pressure,” it said. The education bureau said schools will remain closed at the start of the week “for the sake of safety”. The Polytechnic University (PolyU) has become a major flashpoint in the city rocked by a week of intensified violence and chaos.