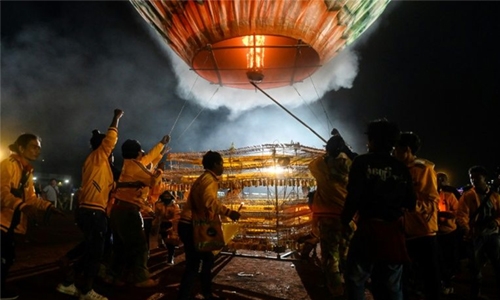 The gigantic hot air balloon folded into itself and fell in a ball of flames, scattering onlookers below at the beginning of Myanmar’s stunning yet treacherous fire balloon festival. Nobody was hurt this time but every year several are injured at the event in Shan State’s capital Taunggyi, a highlight of the annual Tazaungdaing festival of light that marks the end of the rainy season. The celebration is rooted in Buddhism and draws tens of thousands each day.

It has become a “festival for the whole of Burma”, competition judge Thein Zaw, 54, told AFP in between balloon inspections. After months spent working on their designs, competing teams launch —- or try to launch -— some 200 homemade devices over the course of the 10-day festival.

They are weighed down with frames carrying hundreds of fireworks or candles, and a miscalculation on when to light the rockets can result in a fiery catastrophe. Points are scored for aesthetics, teamwork, height reached, and the duration of time spent in the air explained Thein Zaw, who has been on the judges panel for 13 years.

On Monday evening, the competition began after a dancing display by many of Shan’s ethnic groups and the release into the night sky of hundreds of traditional lanterns -- albeit many with the modern twist of a company sponsor name emblazoned on their sides. “I’ve been coming to this event every year since I was a kid,” enthused Thuzar Lin, 26, after a kaleidoscopic shower of fireworks from her group’s creation rained on admiring onlookers.

US formally starts withdrawal from climate accord