Push for ‘safe zone’ | THE DAILY TRIBUNE | KINGDOM OF BAHRAIN 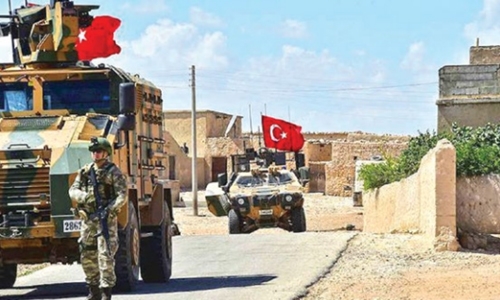 Turkey will set up a dozen observation posts across north-east Syria, President Recep Tayyip Erdogan said yesterday, insisting that a planned “safe zone” will extend much further than US officials said was covered under a fragile ceasefire deal. Less than 24 hours after he agreed the five-day truce to allow Kurdish forces time to pull back from Turkey’s military incursion, Mr Erdogan underlined Ankara’s continued ambition to establish a presence along 300 miles of territory inside Syria.

On the border itself shelling could be heard near the Syrian town of Ras Al Ain on Friday morning despite Thursday’s deal, and a spokesman for the Kurdish-led forces said Turkey was violating the truce, hitting civilian targets in the town. A US official said most of the fighting had stopped, although it would “take time for things to completely quiet down”.

Donald Trump said on Friday he had spoken with Mr Erdogan who told him there had been some “minor” sniper and mortar fire in north-east Syria despite the truce, but that it had been quickly eliminated. “He very much wants the ceasefire, or pause, to work,” Mr Trump said in a post on Twitter. “Likewise, the Kurds want it, and the ultimate solution, to happen.”

The United Nations Office for the Coordination of Humanitarian Affairs described the situation as “reportedly calm in most areas, with the exception of Ras Al Ain, where shelling and gunfire continued to be reported earlier today,” UN spokesman Stephane Dujarric told reporters in New York. The truce, announced by US Vice President Mike Pence after talks in Ankara with Mr Erdogan, sets out a five-day pause to let the Kurdish-led SDF militia pull out of the Turkish “safe zone”.

The deal was aimed at easing a crisis that saw Mr Trump order a hasty and unexpected US retreat, which his critics say amounted to abandoning loyal Kurdish allies that fought for years alongside US troops against ISIS. Turkey’s offensive created a new humanitarian crisis in Syria with 200,000 civilians taking flight, according to Red Cross estimates. It also prompted a security alert over thousands of ISIS fighters held in Kurdish jails.

Mr Trump has praised Thursday’s deal, saying it would save “millions of lives”. Turkey cast it as a victory in its campaign to control territory more than 30 km (around 20 miles) deep into Syria and drive out Kurdish fighters from the YPG, the SDF’s main Kurdish component.