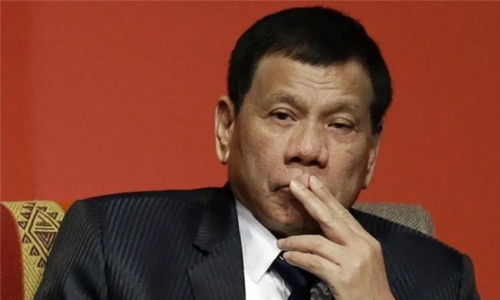 Philippine President Rodrigo Duterte has disclosed that he suffers from an autoimmune disease that can potentially have serious complications, the latest condition for a leader whose health has been subject to speculation. Duterte, 74, was the oldest person to be elected president of the country and questions about his health have swirled since taking office in 2016. His occasional skipping of events and meetings, as well as him discussing his ailments, has only added to the speculation.

Duterte revealed the condition, myasthenia gravis, at an appearance before the Philippine community late Saturday during a visit to Russia. “One of my eyes is smaller. It roams on its own,” he said, according to a transcript released Sunday by his office. “That’s myasthenia gravis. It’s a nerve malfunction. I got it from my grandfather,” he added. The condition causes muscle weakness, and can result in drooping of eyelids, blurred vision as well as weakness in one’s extremities, according to the US National Institutes of Health.

The condition can generally be managed with treatment, but up to 20 per cent of people who have the disease experience at least one “crisis” that requires them to use a ventilator to help breathe, the NIH said. His administration gives out very little information about his health and consistently says the president is in good shape. Duterte himself, however, has discussed his ailments in his frequent, rambling speeches.

In October 2018 he told an audience how he was awaiting the results of a cancer screening. His comments sparked immediate concern and speculation, but days later he said the tests had come back negative. Duterte has also said previously that he suffers from daily migraines and ailments including Buerger’s disease, an illness that affects the veins and the arteries of the limbs, and is usually due to smoking.

He has cited his ill health as the reason for skipping events during summits abroad. The president, known for his deadly crackdown on drugs, also revealed in 2016 that he used to take fentanyl, a powerful painkiller, because of a spinal injury from motorcycle accidents.

North Korea says no talks unless US ends hostilities