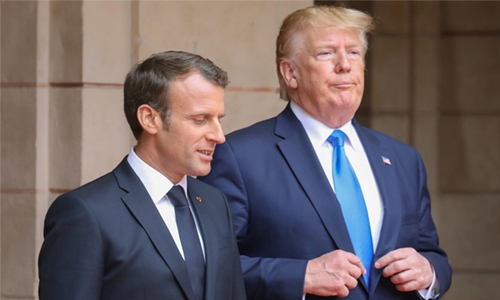 France said yesterday that it “needs no permission” to work towards easing tensions between Iran and the US, after President Donald Trump accused his French counterpart Emmanuel Macron of meddling in the dispute. “On Iran, France speaks with complete sovereignty.

It is working hard for peace and security in the region, it is working to facilitate a de-escalation in tensions and it needs no permission to do so,” Foreign Minister Jean-Yves Le Drian said in a statement. In a tweet Thursday, Trump claimed that Iranian officials want “desperately to talk to the US, but are given mixed signals from all of those purporting to represent us, including President Macron of France.”

“I know Emmanuel means well, as do all others, but nobody speaks for the United States but the United States itself. No one is authorized in any way, shape, or form, to represent us!” he said. Le Drian said the worsening tensions between Tehran and Washington called for initiatives to try to restore dialogue.

“That’s what President Macron is doing, in full transparency with our partners, above all our European partners,” he said, adding that Macron was “obviously keeping American authorities informed”. Trump has reimposed crippling sanctions on Iran after pulling out of an international deal aimed at curbing the country’s nuclear ambitions.

The dispute with Iran is expected to be one of the major talking points at a G7 summit in the French city of Biarritz later this month.