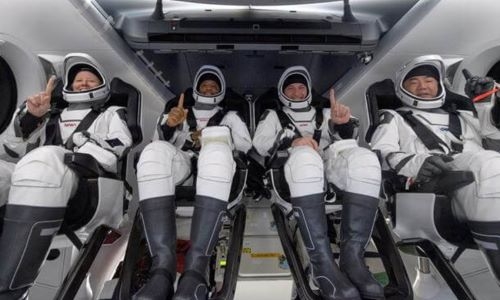 A team of four astronauts transported to the International Space Station (ISS) by the US-launched SpaceX Crew Dragon capsule made it safely back to Earth on Sunday morning.

They splashed down in the Gulf of Mexico, off the coast of the US state of Florida, after about six months spent aboard the ISS.

The return flight to Earth was postponed by a day due to bad weather, dpa reports.

The ISS had become crowded recently: Cosmonauts Oleg Novitsky and Pyotr Dubrov as well as NASA astronaut Mark T Vande Hei had arrived at the start of April, followed by two more US astronauts as well as one French and one Japanese astronaut at the end of the same month.

The four astronauts' launch from US soil in November ended nine years of reliance on Russia to ferry astronauts into space.

The US space agency hopes the launch will mark the beginning of many regular crew flights to the space station from the United States.

The next launch of a manned Crew Dragon spacecraft is set for October.