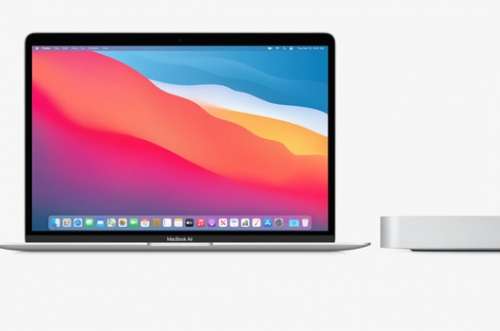 Apple launches first MacBooks based on its own M1 processor

Apple has launched a new Mac Mini and two MacBooks - the first versions which are using a processor based on the company's own designs.

It was the third product launch ahead of Christmas, coming a month after the firm released four models in its new iPhone 12 range, and two months after its first September event in years not to feature an iPhone.

Apple introduced its most powerful-ever chip in September, the A14 Bionic, then described as the company's most powerful chip ever.

Just two months later that title has now gone to the new M1 chip - a "gigantic leap forward" according to the company, which said it contains 16 billion transistors and delivers up to 3.5x faster CPU performance and up to 6x faster GPU performance.

The new chip powers the company's "next generation of Mac" which is comprised of a new MacBook Air (£999), Mac Mini (£699), and 13" MacBook Pro (£1,299) - offering what Apple says are vast improvements on the previous generations of those devices.

All three are available to order from Tuesday, and will begin to be shipped next week, said Apple, alongside the newest version of MacOS, Big Sur, which has been optimised to run on M1 and will be generally available from Thursday.

The new Mac Mini, which costs £100 less than Apple's previous device, is the company's ultra-compact desktop computer, and the tech giant said it was four times faster than the top-selling PC desktop in its price range.