Bahrain1 Racing triumph in US | THE DAILY TRIBUNE | KINGDOM OF BAHRAIN 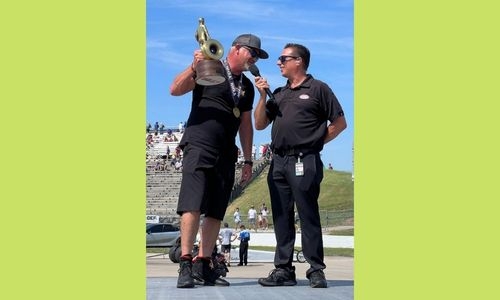 Bahrain1 Racing picked up another impressive victory in the world’s biggest drag racing championship in the US over the weekend, with Justin Bond claiming first place in his Pro Mod class at the Menards NHRA Nationals at Heartland Motorsports Park in Topeka, Kansas. Bond clinched the win after defeating multi-titled driver Rickie Smith in the final round of the National Hot Rod Association (NHRA) event. Bond was behind the wheel of his ProCharger-powered Camaro. It was his first triumph of the 2022 season and it was the fifth of 10 races in the class, which is officially known as the FuelTech NHRA Pro Mod Drag Racing Series presented by D-Wagon.

It also came on a special occasion as he was celebrating his birthday. “We got the monkey off our back (for this year) and we’re going home with some hardware,” Bond was quoted as saying. “We don’t quit and the challenge is accepted. We’re halfway through the season, but (the championship) isn’t over and we’re going to keep working.” Bond won his final—which was the fourth elimination round—against Smith after clocking a time of 5.862 seconds from the left lane of the strip with a speed of 243.90mph. Smith’s mark was 8.832s. In the earlier elimination stage, Bond had a bye while Smith defeated Kris Thorne with a 5.825s time, with Thorne clocking 5.859s.

In the previous step, Bond defeated JR Gray Jr with a time of 5.832s, while Gray Jr had a mark of 7.944s. Smith beat Jose Gonzalez in the same stage, while Thorne narrowly overcame Bond’s Bahrain1 Racing teammate Steve Jackson. Thorne had a time of 5.820s while Jackson powered down the strip for a 5.829s time. In the first elimination round Bond beat Sidney Frigo to advance, while Gray Jr defeated Bahrain1 Racing’s Khalid Al Balooshi. Smith beat Mike Thielen, Gonzalez defeated Doug Winters, Jackson beat Mike Castellana and Thorne defeated Lyle Barnett. With his victory, Bond now stands third in the Pro Mod championship standings with 295 points after the strong showing over the weekend.

Thorne is the leader with 493 points, while Smith follows with 395 points. Bahrain1’s Jackson is fourth on the rankings with 271 points, while Al Balooshi is 10th with 191 points. The FuelTech NHRA Pro Mod Drag Racing Series presented by D-Wagon returns to action this coming weekend as part of the Lucas Oil NHRA Nationals at Brainerd International Raceway in Brainerd, Minnesota. The D-Wagon NHRA Pro Mod Shootout specialty shootout race will also take place during the weekend, with the winner earning a $10,000 prize.