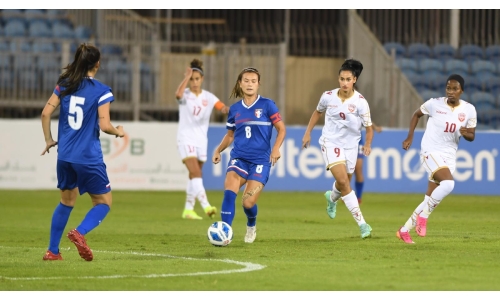 Bahrain went down fighting 0-2 to Chinese Taipei last night, ending their hopes of qualifying for the 2022 AFC Women’s Asian Cup.

Lai Li-Chin and Chen YenPing were both on target for the victors in the second half.

Lai fired in a brilliantly hit free-kick from nearly 30 yards out while Chen headed home from close range.

The result gave Chinese Taipei a perfect six points from their two matches in Group A of qualification.

They had previously beaten Laos 4-0.

Yesterday’s match was played at the Khalifa Sports City Stadium in Isa Town.

It was the Bahrainis’ second fixture within a week after having earlier settled for a goalless draw against Laos.

The home team needed nothing less than a victory in order to book their Women’s Asian Cup berth.

Following the match, the list of eight teams to claim their berths in next year’s AFC Women’s Asian Cup through qualification was completed.

Huda Ali Salman was the goalkeeper, while Manar Yaqoob, Marwa Zayed, Rawan Alali and Fatema Alnesuf were the back four.

Chinese Taipei went head on the hour mark after Lai scored with her stunning free-kick.

Her left-footed attempt flew directly to the top-left corner of the net and away from the outstretched arms of Bahrain’s goalkeeper Huda.

In the 78th minute, Chen applied the nail in the coffin after heading home from close range.

Her effort came after Huda saved a shot by Pan Yen-Hsin.

The ball then hit the crossbar and Chen was able to get to the rebound, which she headed home.

The AFC Women’s Asian Cup finals will be held next year in India.

There were a total of 24 teams vying for a place in the competition through qualifying, where they were divided into eight groups.

All eight group winners at the end of a single round-robin booked their place.

Joining Group A winners Chinese Taipei as marching through to the Women’s Asian Cup finals are Vietnam from Group B, Indonesia from Group C, Myanmar from Group D, South Korea from Group E, the Philippines from Group F, Iran from Group G and Thailand from Group H. Japan, Australia, China and hosts India had automatic berths and did not compete in the qualification process.

WHO calls on wealthier countries to stand back on vaccine supplies