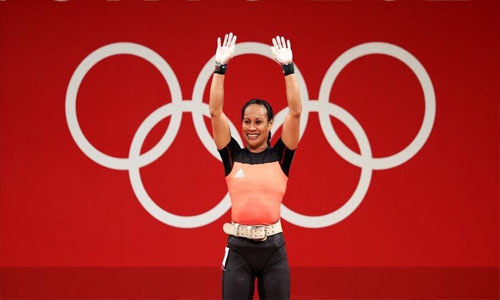 When women’s weightlifting was introduced as an Olympic sport in 2000, Papua New Guinea’s then 16-year-old Loa Dika Toua became the first-ever female Olympian lifter. On Saturday in Tokyo, the now 37-year-old athlete did it for the fifth time.

Wearing her country’s flag colours of red and black, Toua grabbed the bar with a scream, made two good lifts at snatch, and smiled in joy, making a heart gesture with her hands at the camera.

Amid coronavirus restrictions, her achievement in returning to the Games after previously lifting in Sydney, Athens, Beijing and London was witnessed live by just a handful of journalists, judges, coaches and other athletes – an achievement nearly thwarted after she contracted tuberculosis in 2013.

Coming from a family of weightlifters, Toua was encouraged to get involved in the sport by her aunt.

“When I took it up I just did it for fun, playing around with the weights,” Toua told the official Olympics website.

“But I loved it, I seemed to have a special talent and when I was 13, I was allowed to compete internationally.”

At one stage after the tuberculosis diagnosis, Toua, who has yet to win an Olympic medal, considered retiring from the sport.

“I never told anyone this, but when I was in hospital, I sort of gave up on weightlifting. I guess that was the worst time for me,” said Toua, who was her country’s national flag bearer at the Athens 2004 Olympics opening ceremony.

“But when I walked in and [coach] Paul [Coffa] hugged me, and told me that everything was going to be okay, that I needed to train the next day … that changed my mind.

“I couldn’t bend my knees, I couldn’t even squat 50 kg (kilogrammes), that’s how hard it was during that period. But I fought my way back.”