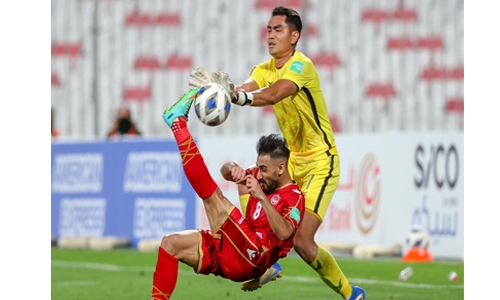 Bahrain romped to an emphatic 8-0 victory over Cambodia Thursday night to rise to the top of Group C in joint qualification for the FIFA World Cup 2022 and the AFC Asian Cup 2023.
Kumail Alaswad, Mohammed Al Rumaihi, Ali Madan, Jassim Al-Shaikh and Ismaeel Abdullatif were all on target for the Bahrainis at the National Stadium in Riffa, with Alaswad, Madan and Abdullatif all scoring twice.
Six of Bahrain’s goals came in a one-sided second half, which was capped by Abdullatif’s second in the third minute of stoppage time.
The lopsided result was Bahrain’s third win in six qualifying matches as they improved to 12 points to move to first place in their group's standings. They leapfrogged former leaders in Iraq, who were not in action Thursday.

Iran beat Hong Kong 3-1 in the other Group C game.
Bahrain coach Helio Sousa kicked the match off with a starting 11 that featured Sayed Mohammed Jaafar in goal; Hamad Al Shamsan, Ahmed Mirza, Ahmed Nabeel and Rashed Al Hooti in defence; Madan, Ali Haram, Al Shaikh, Alaswad and Mahdi Humaidan in a dynamic five-man midfield; and Al Rumaihi as the lone striker.
In the eighth minute, Alaswad gave the hosts a brilliant start with a left-footed shot from the edge of the box that went straight into the top-right corner of the goal. 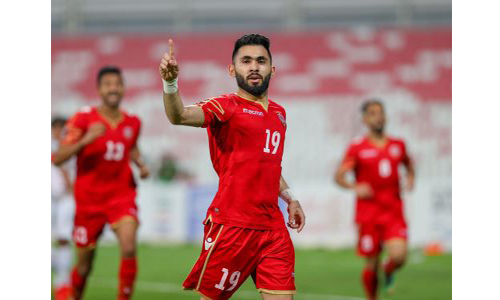 Madan could have scored similarly the very next minute, but Cambodia goalkeeper Keo Soksela comfortably collected his shot. Haram also came close in the first 20 minutes but missed the target by inches, as Bahrain bombarded their rivals with chances, setting the tone for the match.
Al Rumaihi then made it 2-0 in the second minute of first-half stoppage time after taking advantage of some poor Cambodia defending and slotting the ball home from close range past Soksela. Al Rumaihi’s strike was the last kick before the break, and the Bahrainis headed into the locker rooms with the advantage.
Just moments into the second half, following some fine approach play, Al Shaikh sent in a short pass to an unmarked Madan in front of goal, and he needed only to tap the ball in for the 3-0 lead.
Al Shaikh then added his own goal just six minutes later. After a poor clearance from Cambodia, the crafty playmaker aimed for the top-right corner of the net and then hit a curling shot from just outside the box.
Bahrain was not done and Madan made it 5-0 with his second goal in the 65th minute. He was once again on the receiving end of a cross in the face of goal, this time supplied by Alaswad from the left of the box, and he sent the ball home with the bottom of his foot.
Alaswad secured his brace in the 71st minute with a well-placed shot from the middle of the area, assisted by Mohammed Marhoon; and then in the 75th minute, Abdullatif made his first contribution with a header right in front of goal off a precision cross from Waleed Al Hayam on the left flank.
Abdullatif later applied the final nail in the coffin in the match’s final minute, heading the ball home just inches from the goal line from an Alaswad pass.

Bahrain returns to action on Monday night against Iran, while Cambodia next plays Iraq earlier that same evening.