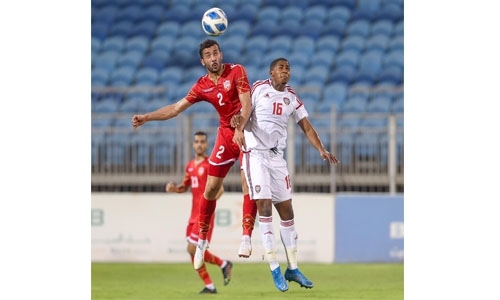 Bahrain’s under-23 Olympic football team lost to their counterparts from the UAE 2-3 last night in a friendly match played at Khalifa Sports City Stadium in Isa Town.

The game was part of both teams’ preparations for the West Asian championship as well as the qualifying process for the AFC U23 Asian Cup 2022.

The qualifiers are set to be held from October 23 to 31 in a centralised format. Bahrain and UAE are set to play in another friendly, which is scheduled for Saturday.

The Emiratis took an early lead in yesterday’s match before Alasam equalised for Bahrain. The visitors then went up 3-1, but substitute Faisal Abdulla was able to get a goal back for the home side before the final whistle. Bahrain will also be facing two more opponents in a pair of friendlies in the coming weeks.

South Korea are the competition’s defending champions. The previous edition was held last year in Thailand. The Bahrainis also participated then, but bowed out of contention in the group stage, where they were drawn with Australia, Iraq and hosts Thailand. They ended the competition with two draws and one loss.