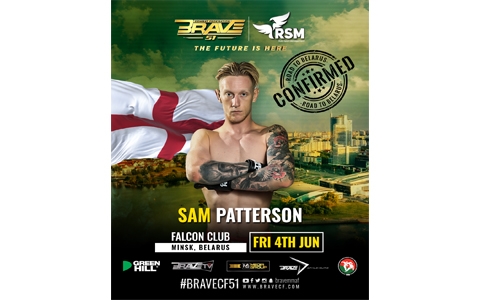 Top Lightweight Sam ‘’The Future’’ Patterson will be making his much-anticipated return to the BRAVE CF Arena on June 4th, as the fastest-growing MMA organization in the world debuts in Minsk, Belarus, in association with Rukh Sports Management.

Patterson is coming off a career-defining win - a firstround knockout of Felipe Silva back at BRAVE CF 41.

The victory was the second straight for Sam, who had also beaten Cian Cowley at BRAVE CF 33.

Sam’s announcement was followed by that of Abdul Karim Badakhshi, one of Afghanistan’s finest Bantamweights and the brother of BRAVE CF standout Abdul Azim Badakhshi.