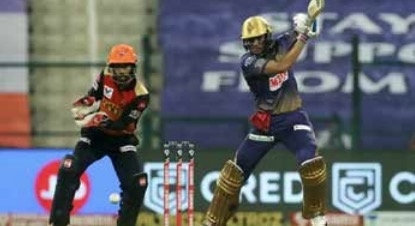 Kolkata Knight Riders gave Sunrisers Hyderabad a clinical beating by seven wickets in the Indian Premier League yesterday. Opening batsman Shubman Gill made a solid unbeaten 70 off 62 balls and shared a match-winning 92-run, fourth-wicket stand with England white-ball specialist Eoin Morgan 42 not out as Kolkata raced to 145-3 off 18 overs.

Hyderabad had been restricted to 142-4 after David Warner elected to bat first, which broke the sequence of teams electing to field after winning the toss in this IPL. Australias Pat Cummins (1- 14) claimed the key wicket of Jonny Bairstow in his second over and tied down the Hyderabad batsman, while spinner Varun Chakravarthy (1-25) caught and bowled Warner on 36.

Andre Russell didn't allow Hyderabad to accelerate at the end and removed top-scorer Manish Pandey on 51 as Kolkata captain Dinesh Karthik adroitly used seven bowlers. Kolkata has two points from two games while Hyderabad was at the bottom of the eight-team standings without a point.