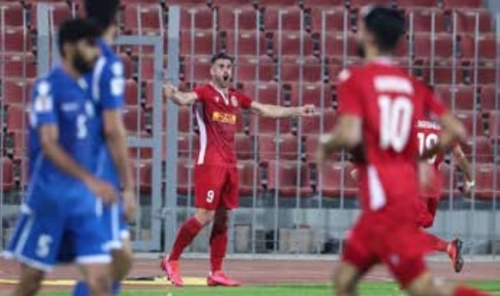 Title contenders Hidd and Muharraq played to a 1-1 stalemate last night as the 2019/2020 Nasser bin Hamad Bahrain Premier Football League got back into action, following a months-long ban due to the coronavirus (COVID-19) crisis. Senegalese professional Mamadou Drame and naturalised striker Thiago Augusto Fernandes were the scorers for their respective teams.

Drame put Hidd in front with a goal on the stroke of half-time, while Fernandes equalised on the hour-mark to give Muharraq a share of the points. Drame scored from a brilliant low cross by Mohammed Fares on the right wing, tapping the ball into the net after poor Muharraq defending. Muharraq later levelled the proceedings with a Fernandes header, off a high cross from the right flank.

Muharraq’s Nigerian professional Prince Obus Aggreh found the net in the 82nd minute after a slotting home a rebound off an Ismaeel Abdullatif shot, but it was waived off as Aggreh was offside. With the result, the two teams remained two points apart atop the league standings. Hidd improved to 29 points in first place while Muharraq went to 27, with six games each remaining.

In other matches yesterday, Riffa defeated Manama 3-1 and Al Ahli beat Al Hala 3-0. Riffa claimed their seventh win and improved to 22 points in third place, while Ahli won their fourth match and rose to 14 points while ranked seventh on the table.

Manama suffered their third loss and stayed sixth with 15 points, while Hala were dealt their ninth defeat and remained bottom of the table with five points. League action continues tonight with another two matches. Al Shabab play Al Najma at Khalifa Sports City and Busaiteen take on East Riffa at the Muharraq Club stadium, both scheduled for 7pm starts.