Giroud, Alonso back in favour as Chelsea sink Spurs | THE DAILY TRIBUNE | KINGDOM OF BAHRAIN 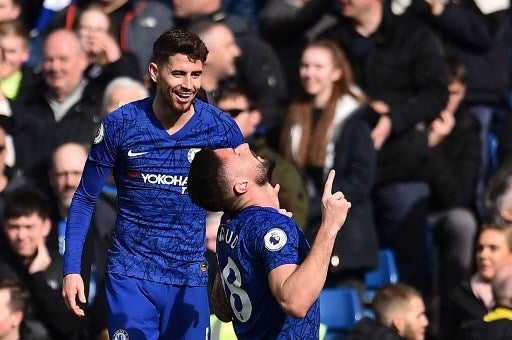 Olivier Giroud and Marcos Alonso came in from the cold to inspire Chelsea’s 2-1 win against Tottenham as the Blues cemented their grip on fourth place in the Premier League yesterday.

Giroud and Alonso had been reduced to fringe figures in Frank Lampard’s first season as Chelsea manager. But Lampard restored both veterans to the team at Stamford Bridge in a gamble that paid rich dividends. With Tammy Abraham only fit enough to make the bench, Giroud started for the first time since November and the France striker’s fine finish opened the scoring in the first half.

The 33-year-old could have joined Tottenham had Chelsea signed a forward in January, but instead he netted his first club goal since August and his first in the Premier League since April. Alonso, 29, maintained the theme of exiles getting back in favour as the left-back struck in the second half of his first league start since Chelsea’s win at Tottenham in December.

Antonio Rudiger’s own goal came too late to ruin Chelsea’s first win in five league games, moving them four points clear of fifth placed Tottenham in the race to qualify for the Champions League. Ending Tottenham’s threegame winning streak in the league was the perfect response to Monday’s home defeat against Manchester United. It was no more than they deserved after a vibrant performance that finally answered Lampard’s call for a killer instinct in the final third.

Tottenham have now won just once in their last 34 visits to Stamford Bridge, making it a painful return for their former Chelsea boss Jose Mourinho, who was beaten by Lampard for the second time this term. Mourinho had ramped up the mind games on Friday when he claimed to know Lampard was planning to use the same fiveman defence that helped the Blues win at Tottenham earlier this season.

Mourinho was spot on, with Lampard making four changes in a return to the system he predicted, but he could not come up with an effective solution.