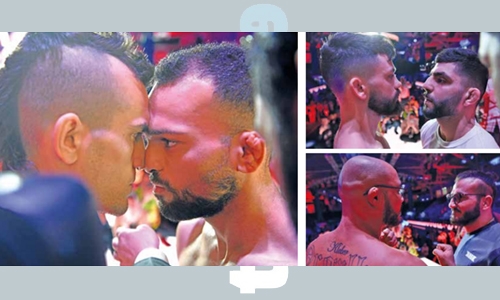 Hamza Kooheji will make his main event debut in a night full of emotions, this Friday, at the Khalifa Sports City Arena, in Isa Town, Bahrain. Starting at 5.30 PM, BRAVE CF 29 will be the culmination of a lifelong struggle for recognition, in a sport that went from zero to 100 in the country thanks to the efforts of HH Shaikh Khalid bin Hamad Al Khalifa’s relentless work in providing local fighters with the proper platform to become the heroes they deserve.

As “The Pride of Bahrain” makes the walk tonight, he will become the first Bahraini to fight in a main event for BRAVE Combat Federation in the Kingdom. Kooheji has been one of the stalwarts of the mixed martial arts scene in Bahrain and was moved by the huge support he received this Thursday, during the ceremonial weigh-ins.

The last fighter to come to the stage to face off against his opponent, Argentina’s Nahuel Gandolfi, Hamza has become one of the faces of the sport in the Middle East and definitely a hero for the Bahraini people. This could be in sight as he was cheered on to the stage and intimidated his adversary in the last staredown before the duo throw down during fight night.

From the start of his career, coached by current BRAVE CF president Mohammed Shahid, to the fame acquired through his efforts and victories for BRAVE CF around the world, Kooheji hasn’t changed at all. He’s still the best training partner at KHK MMA, the world-renowned gym in the heart of Bahrain, that has become synonymous with grassroots development.

Not only he’s one of the Bantamweight division’s top fighters, Hamza is also a role model for the youngsters fighting their way in the amateur scene. It was no surprise, then, that the youngsters were screaming for their idol, giving him the energy to represent Bahrain with honour and courage, something he’s always done.