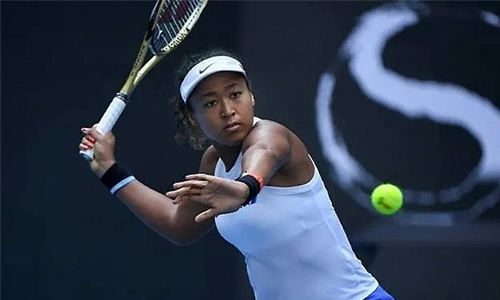 Naomi Osaka said she had been “really riled up” as Japan’s two-time Grand Slam champion reached the second round at the China Open yesterday despite being far from her best. The 21-year-old former world number one racked up 26 unforced errors on the way to a 6-3, 7-6 (7/5) win over Jessica Pegula of the United States. Fourth seed Osaka looked frustrated and disgruntled on several occasions against the 76th-ranked Pegula.

Osaka, who plays Andrea Petkovic of Germany next in Beijing, was disappointed that she was unable to replicate the form which won her the Pan Pacific Open in Japan a week ago. “During tournaments, the first match is always the worst for me,” said the US-based star. “But I was kind of expecting it to be better because I just played really well in Tokyo (actually Osaka). “I don’t know, I thought it would carry on. I was a little bit frustrated that I felt my game wasn’t really where I left it.”

“I just felt like today I was really riled up, not really sure why,” she added, also describing herself as “very stressed” and “very nervous”. “I also didn’t want to lose in the first round,” she said. Osaka’s triumph in the Pan Pacific Open was her first trophy since her second consecutive Grand Slam win, at the Australian Open in January. Another two-time Grand Slam winner, Simona Halep, cruised into round two in Beijing with a 6-1, 6-1 demolition of qualifier Rebecca Peterson.

The Romanian has had ongoing problems with her back and, despite having little trouble swatting aside the Swede, admitted she was unable to play her normal game. “I’m not 100 percent recovered, I still feel pain,” said the sixth seed. “Always when you have an injury, it’s a little bit risky. “But I accepted it, I took the risk.” Venus Williams, whose sister Serena is not in the Chinese capital because of a knee problem, battled into the next round with a 6-3, 4-6, 7-5 victory over Barbora Strycova.