Real hold off Atletico | THE DAILY TRIBUNE | KINGDOM OF BAHRAIN 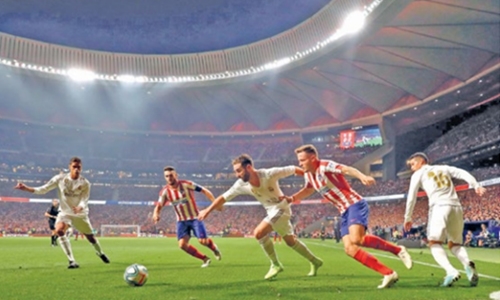 Real Madrid regained top spot in La Liga on Saturday after a goalless derby with Atletico that saw them move above surprise package Granada and maintain their small lead over a crowded chasing pack. Unbeaten Real are a point ahead of promoted Granada and Atletico Madrid after Diego Simeone’s side failed to break down their well-drilled local rivals, whose disciplined performance at the Wanda Metropolitano was deserving of at least the point they gained.

“These matches with Atletico are very physical, this is one of the hardest grounds we have to visit during the season,” Real captain Sergio Ramos told broadcatser Movistar. “It was difficult to create chances in attack because they leave such little space. The point does little for us though as we wanted the three even more.” Real are a further point ahead of fourth-placed Barcelona, who won a hard-fought clash at Getafe 2-0 thanks to goals from Luis Suarez and Junior, and Real Sociedad, who can themselves go top if they beat a Sevilla side down in eighth but just five points behind Zidane’s leaders.

On a night of few clear-cut chances Atletico probably had the best opportunities but failed to test Thibaut Courtois in the Real goal, while the away side drew a couple of fine saves from Jan Oblak on their forays forward. The best came 15 minutes from the end, when the Slovenian stopper got down brilliantly to his left to palm away Karim Benzema’s powerful header from a Nacho cross. Just seconds before Atletico had come to within inches of opening the scoring when Saul Niguez met a corner with a header that flashed just past the upright.

“It was a standard save for a goalkeeper,” said Oblak. “It was well-placed but I could see the ball and I hope it’s always like that -- the fewer goals we let in the better it is for everyone.” Granada had moved temporarily top of La Liga before the derby after Antonio Puertas’ first-half strike saw them squeeze past rock-bottom Leganes. Puertas crashed his longrange winner into an empty net after Juan Soriano had come charging out of his goal to close down Roberto Soldado just before the half-hour mark.

Athletic Bilbao lost for the first time this season at home to crisis club Valencia, who bagged their second win of the season thanks to Denis Cheryshev’s 27th minute strike. ‘Los Che’ had been sent into turmoil when owner Peter Lim sacked Marcelino Garcia Toral earlier in the month. But despite player and fan anger at Lim’s decision, two draws and now a win after their shock victory at Chelsea in the Champions League have them in ninth on nine points.