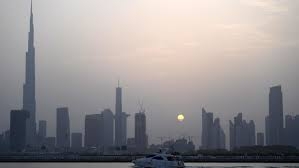 Dubai-based construction giant Emaar Properties reported yesterday a slight increase in its 2019 net profits, despite falling real estate prices. The one percent increase, although minimal, comes amid falling prices in Dubai’s key real estate market, where companies -- including leading private developer Damac Properties -- have been struggling to make a profit. Emaar posted a net profit of $1.69 billion for 2019, up one percent on the previous year, it said in a statement.

However, the company recorded a revenue of $6.69 billion last year, about a four percent decrease from 2018. Emaar, which developed the world’s tallest building, Burj Khalifa, and is the largest listed firm on the Dubai Financial Market, is also involved in the entertainment, hotel and mall businesses. “Emaar’s performance in 2019 was resilient, maintaining growth within a challenging market,” Emaar chairman Mohamed Alabbar said in the statement.

Dubai is known for its beachfront skyscrapers and manmade islands, but it has been stuck in a five-year property downturn, with analysts saying there will be no relief in the near term. Damac Properties announced yesterday its first annual loss in a decade. The company reported a loss of $10 million for 2019 compared with a net profit of $313 million in the previous year, as revenues dropped by 28.2 percent to $1.2 billion, a statement said.

The government in 2018 introduced a raft of rescue measures, including easy visa terms for expatriate buyers and permanent residency permits for big investors. In September, a top-level committee was established to rebalance the market. Real estate prices in Dubai have been on the decline since 2014 due to oversupply by builders, who are anticipating a pick up in sales ahead of the international trade fair Expo 2020.