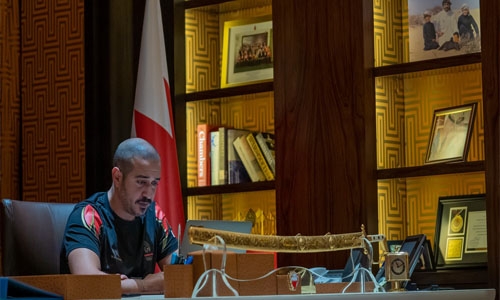 HH Shaikh Khalid bin Hamad Al Khalifa, First Deputy President of the Supreme Council for Youth and Sports, President of the General Sports Authority and President of Bahrain Olympic Committee has affirmed the importance of honouring Bahrain in the upcoming 2020 Tokyo Olympics which will take place on July 23 in the Japanese capital Tokyo, urging the five national teams who will represent the Kingdom of Bahrain to give their best to achieve the best results.

HH Shaikh Khalid expressed confidence in HH Shaikh Isa to guide the delegation and meet the needs of the Bahraini teams in order to create the ideal environment for them to allow them to accomplish the best results.

HH Shaikh Khalid also announced that Bahrain’s national handball team captain Hussain Al Sayyad will have the honour to hold Bahrain’s flag in the inauguration ceremony in recognition of his achievements and accomplishments.

From his side, Al Sayyad expressed utmost thanks and gratitude to HH Shaikh Khalid for this gesture and His Highness’ confidence, underlining that his selection is a source of pride and gratitude.

Moreover, HH Shaikh Khalid delivered a speech during the meeting for the players and the teams, underlining the importance of raising Bahrain’s flag high and honouring the country. “Bahrain will make history by sending the largest ever delegation in the Olympics at GCC level with five teams taking part in five different games (handball, Athletics, shooting, swimming and boxing).

This will reflect the continued growth witnessed in the sports area in Bahrain. While we praise the qualifications of our national teams for the Olympics, we urge all the players to be equipped with desire and high spirit in this major event.

We take this opportunity to embody the theme for_this_ flag in this important event,” HH Shaikh Khalid said, urging all the national teams to honour the Kingdom and to be the best ambassadors for the country by giving their best. “Representing the Kingdom is an honour, and it came in the largest sports event in the world which is the Olympics.

You were given this honour thanks to the efforts you exerted with the support of the Bahrain Olympic Committee and the other sports associations and federations. You have to enjoy the competitions and be equipped with the desire to top the podium.” HH Shaikh Khalid added. His Highness also affirmed the significance of following the measures that aim to combat the spread of the Corona virus (Covid-19).

Moreover, His Highness praised the efforts exerted by the Bahrain Olympic Committee and the administrative delegation in collaboration with the associations and federations to prepare the teams for the event.