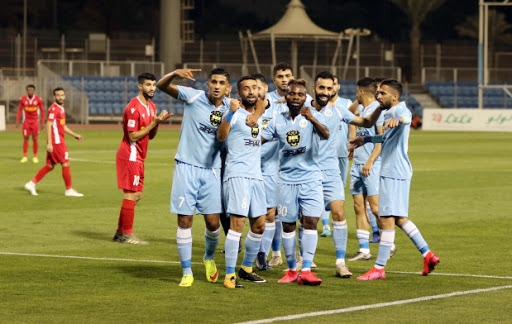 Abdo fired in a brilliant equaliser in the 90th minute as his team pressed hard to level the proceedings after trailing for most of the match.

The influential Bahraini midfielder found himself unmarked around 30 yards out on the left flank, and he took advantage of all that space with a curling left-footed shot that deceived Riffa goalkeeper Sayed Shubar Alawi.

The ball sailed into the topleft corner of goal as Alawi was off his post and was helpless to make a stop. Earlier in the contest, Riffa took the lead in the 13th minute through Bahrain national team star Mohammed Marhoon.

His strike was enough to give his team the lead until Abdo’s late heroics. Abdo’s goal came after Muharraq were firing on all cylinders in the final minutes.

Brazilian professional Everton de Mendonca and naturalised Bahraini Thiago Augusto led their charge but could not supply the finishing touches. Augusto also hit the crossbar with a long shot.

Abdo then had a great chance in the box in the fifth minute of stoppage time to score a winner, but his shot was blocked, preserving the deadlock. With the result, Muharraq moved to within two points of league leaders Al Hidd on the standings.

They have 19 points from their 11 games in fourth place. League action continues this weekend with the 12th round of play. Only seven rounds remain until the end of the season.