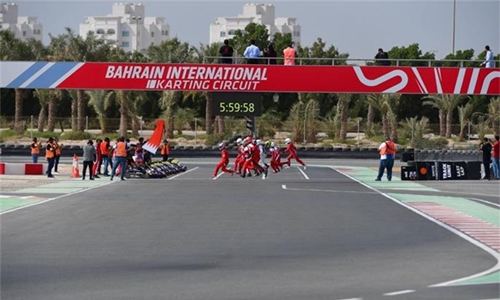 Bahrain International Karting Circuit (BIKC) will host the opening round of the 2019/2020 Bahrain Karting Enduro Championship (BKEC) this weekend. Following an ultra-exciting meeting of national sprints last week, the spotlight shifts to endurance racing with a threehour challenge set to take place Saturday at the world-class Sakhir facility. The event marks the first of four rounds in this year’s BKEC.

The series will not only measure a driver’s quickness and racing ability, but it will also require superior teamwork, perseverance and reliability. Teams will go head to head not only against one another, but they will also face the test of time and the unpredictability of the elements. Action on Saturday is scheduled to begin at 3pm with Qualifying Practice. The three-hour race then flags off at 4pm and will conclude at exactly 7pm. To date, 14 teams have signed up to compete.

They include three teams representing BAPCO, two for Racing BH, three from Bahrain Airport Services, two from ARAMCO, and two for Manama Drift, along with GO Bahrain and Pakistan Team. They will be battling it out in the Pro, Corporate and Nations classes. Each team will be competing in identical 390cc RT8 karts. Entrance to BIKC is free of charge. Following this weekend’s meeting, Round Two on November 9 will be another threehour race.

Round Three is then set for January 18 next year and it will be a six-hour event. Round Four will then be the championship-finale and the ultimate challenge of the season: a 24-hour race, scheduled for February 14 and 15.