Djokovic retires with injury | THE DAILY TRIBUNE | KINGDOM OF BAHRAIN 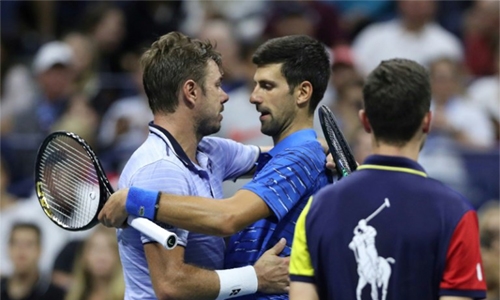 Top-ranked defending champion Novak Djokovic retired from his US Open match Sunday after dropping the first two sets to Stan Wawrinka, sending the Swiss three-time Grand Slam champion into the quarter-finals. Djokovic, who won four of the past five Slam crowns and 16 overall, was in pain from a nagging left shoulder injury while 34-year-old Wawrinka, who also beat Djokovic in the 2016 US Open final, showed himself a true title contender. “It helped me big time knowing I have the game to beat him on that court,” Wawrinka said.

“It’s never the way you want to finish a match. I’m sorry for Novak. He’s an amazing champion.” On a day when Roger Federer cruised into a quarter-final against Bulgaria’s Grigor Dimitrov and Russian fifth seed Daniil Medvedev reached his first Slam quarter-final, Djokovic’s shocker stole the show. “It’s frustrating. Very frustrating,” Djokovic said. “Obviously not the first, not the last player to get injured and withdraw from one of the biggest events in sport.” Djokovic admitted he has been hurting for weeks without detailing how or when the injury took place. “The pain was constant for weeks now, some days higher, some days with less intensity,” Djokovic said.

“Taking different stuff to kill the pain instantly. Sometimes it works. sometimes it doesn’t. “You just know (to quit) when you know, I guess, when you feel like you’re not able to hit the shot anymore.” Wawrinka has battled nearly two years to recover Slam-winning form after knee surgery and his performance, after a French Open quarter-final run, shows his journey is nearly complete. “Tonight was something special. I’m really happy with the level,” said Wawrinka. “I think I was playing super good tennis. I’m happy to be back.

“It has been really tough since my surgery. It has took me two years to be back at that level. It feels really incredible.” A strong warm-up told 23rd seed Wawrinka his game was solid and he took advantage of netted Djokovic backhands on both set points he won, some of the 35 unforced errors the Serbian star made. “I was feeling great,” Wawrinka said. “When I came to practice I was moving well, playing well. I was quite confident with the level I had but you never know when you are playing the number one player in the world.”

Medvedev, a winner at Cincinnati and runner-up at Montreal and Washington in hardcourt tuneup events, advanced to face Wawrinka by beating 118th-ranked German qualifier Dominik Koepfer 3-6, 6-3, 6-2, 7-6 (7/2). “He’s a great athlete playing super good tennis,” Wawrinka said. “I’m sure it will be a great match.” Medvedev won his only match against Wawrinka in the 2017 first round at Wimbledon.

Federer, a five-time US Open champion with 20 Slam titles, advanced to the US Open quarter-finals for the 13th time by routing Belgian 15th seed David Goffin 6-2, 6-2, 6-0 in only 79 minutes. “Sometimes these scores just happen,” Federer said. “You catch a good day, the opponent doesn’t, then things happen very quickly... I found my groove after a while and was able to roll really. Never looked back.”

The 38-year-old Swiss third seed is 7-0 lifetime against 78th-ranked Dimitrov, who dispatched Australia’s 38th-ranked Alex de Minaur 7-5, 6-3, 6-4. “Feeling excited first to be in US Open quarter-finals for the first time. This is what I practiced for, to play those matches,” Dimitrov said. “It’s a great opportunity for both of us. Hopefully we have a great battle and we can produce some great tennis.” Federer unleashed a dominant performance, improving to 9-1 all-time against Goffin. 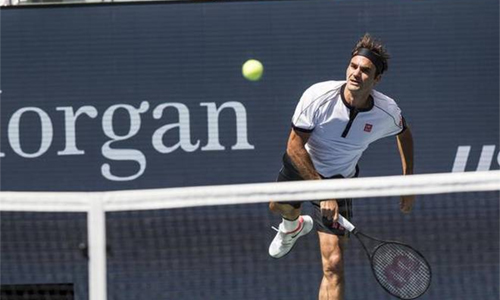 Roger Federer of Switzerland returns a shot during his Men’s Singles fourth round match against David Goffin of Belgium.