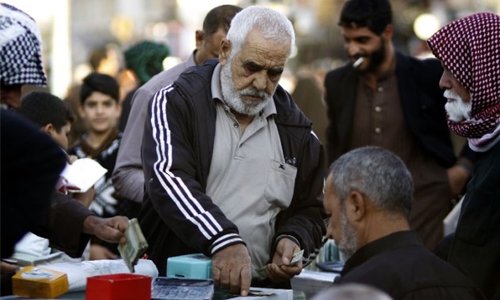 The US Treasury took fresh aim yesterday at the international network funnelling dollars and euros to Iran’s Islamic Revolutionary Guard Corps (IRGC), naming 25 individuals and entities for financial sanctions. The targets were front companies of the IRGC-controlled Ansar Bank and Ansar Exchange in Iran, Turkey and the United Arab Emirates, that have collectively been able to move more than $1 billion for the Tehran regime, the Treasury said.

The funds have benefitted both the IRGC and the Ministry of Defense and Armed Forces Logistics, according to a Treasury announcement. The sanctions seek to lock those named out of the global financial system by banning US citizens and US businesses -- including international banks with a US presence -- from doing business with them.

“Any foreign financial institution that knowingly facilitates a significant transactions for any of the individuals or entities designated today could be subject to US sanctions,” the Treasury warned. The 25 named were mostly relatively small trading and money exchange firms, dubbed by the Treasury “front companies,” and their owners and managers who worked with Ansar Bank and Ansar Exchange.

In addition key figures in Ansar Bank and Ansar Exchange were designated for sanctions. “This vast network is just the latest example of the Iranian regime’s use of deceptive practices to exploit the global financial system and divert resources to sanctioned entities,” said Treasury Under Secretary for Terrorism and Financial Intelligence Sigal Mandelker.

Washington has stepped up economic pressure on Iran since President Trump decided to withdraw last year from the 2015 agreement to freeze the country’s development of nuclear weapons, saying Tehran was “not living up to the spirit of the deal.”