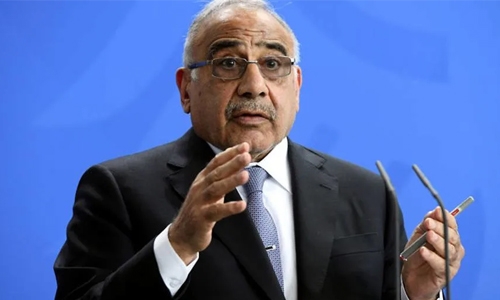 Iraq is close to signing a $53 billion, 30-year energy agreement with Exxon Mobil and PetroChina, Prime Minister Adel Abdul Mahdi said yesterday, denying any link between the mega-project and US permission for Iraq to do business with Iran. Iraq expects to make $400 billion over the 30 years the deal will be in effect, the prime minister said.

The southern mega-project involves the development of the Nahr Bin Umar and Artawi oilfields and raising production from the two fields to 500,000 barrels per day (bpd) from around 125,000 bpd now, Abdul Mahdi said. The project is crucial to supplying water to oilfields in the south in order to boost pressure and keep production steady.

Media reports had quoted Iran’s ambassador in London on Monday saying the United States would grant waivers to Iraq allowing it to deal with Iran economically, in exchange for Baghdad signing an oil deal with Washington. “Talks now between the oil ministry and Exxon Mobil and PetroChina are focused on how to split profits if oil prices rise or decline,” Abdul Mahdi said in response to a question on the obstacles holding up a final agreement.

“The deal lasts for 30 years and such financial details are sensitive and should be given more discussions,” he added.

US returns $57 million in 1MDB Hollywood money to Malaysia